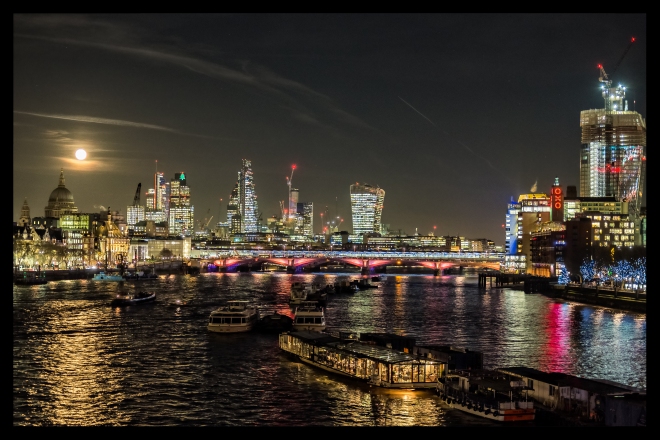 Many of my phone-photographer friends and work colleagues think I’m just a little bit eccentric for nearly always having an ‘old fashioned’ camera with me on most days.  At my age I think it’s probably OK and possibly compulsory to be eccentric so not a problem…..

Here’s a grab shot from my journey home the other night.  We were walking across Waterloo Bridge when I looked East and saw this scene (actually I saw it a few minutes earlier when the moon was rising behind St Paul’s Cathedral but this was the best of my images).  I wasn’t the only one there by any means… there were several tripods around and lots of what can only have been professional kit (the kind of lenses you normally only see around football pitches or on safari….which come with the kind of prices you make sure are paid by somebody else).  And of course I wasn’t in the slightest bit envious given the camera I normally carry is a fixed wide-angle lens Fuji X100S (OK, maybe a little).  I gave it a bit of extra reach with the TCL convertor which gets it all the way to a standard 50mm field of view in 35mm terms, leant against the railings and gave it my best shot….

I really enjoyed spending about 10 minutes here, trying to get the best composition I could (there’s almost no crop here, it’s pretty much the whole image) and making sure it was as sharp as I could get it.  After a bit of experimentation, I ended up using a low ISO (400) to keep the noise down, a faster aperture than I’d originally planned (f2.8) and an exposure time of 1/4 second.  I’m quite pleased with the end result.

The guy next to me with the kind of lens that comes in its own suitcase got a superb image of the cross on the top of St Paul’s silhouetted against the moon, and was busy sending that to some agency across the Interweb.  But I captured one of my favourite views of London – the city lit up by the river – which I never tire from.  I’ve no doubt I’ll be taking future photographs of this view too, using whatever camera that’s with me at the time – after all as the saying goes, it’s the best one I’ll have.